A forum for over-50s interested in keeping their brains active and healthy while having fun in the process. Join our friendly forum and enjoy some great discussions and challenging brain games.
https://silverpeers.com/

by Buck_naked
so what when wrong for labor?
how did the polls get it so wrong?
personally i'm jumping for joy
as a battler with a few shares i was going to lose $5000 per year under labor.

1) ".......
I don't think exit-polls have ever been wrong. I'm beginning to think conspiracy theories.

Re No 1):
I feel that Dreamweaver has got it nailed!
In my first post after the results had been announced I exclaimed my suspicions that not all seemed above board. I shut up.
Now, that a second member shows some concerns it maybe an invite to consider the possibilities of a little "nudge, nudge" in more depth.
The issue is too close to what happened in the USA with Clinton and Trump in 2016, which still plays on the minds of millions of Americans!


Re No 2):
Hi Buck, right "How did the polls get it so wrong?"
We don't know and millions of Australians would give a few dollars for the correct answer.
In your post you call yourself a battler with a few shares who was going to lose $5000 pa if Labor had won the race!
Such a message is a little confusing to me, and perhaps a few others.
a) As a 'battler', I can't afford to own shares, especially not with a Conservative government in place.
b) In the six years since the LNP won Government shares have dipped some 1.6% simply because of the leadership changes within the Government.
c) To lose $5,000 per year in share values is rather an impossibility as one would naturally sell losing shares at the first signs of weakness in the market.
There are a few more questions but it isn't making any difference to the result until someone finds the key to the mystery!

by Buck_naked
it was the franking credit policy. it's being blamed as a major cause.
in queensland it's the coal jobs.
shocking primary vote for labor everywhere, - only 1 person in 3 voted labor.
whatever they are selling, people are not buying it. 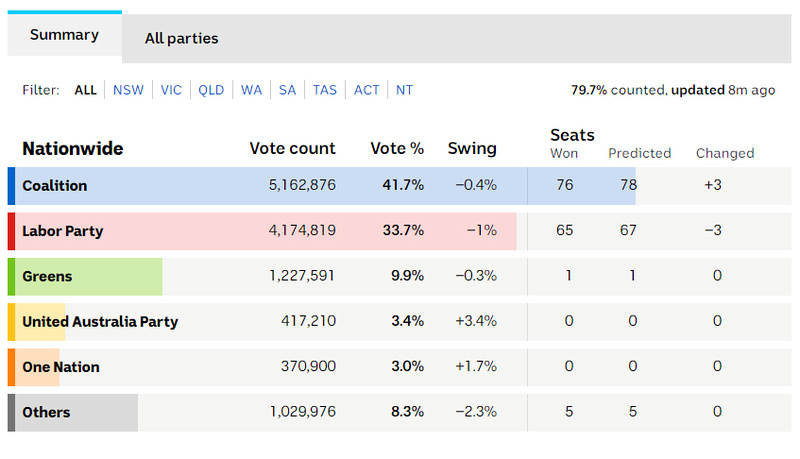 by Perrorist
It's not that simple, Buck. There was massive focus on tax by the LNP, backed up by the right-wing media. Apparently, retirees were the major force behind the swing against Labor.

by godfather
Yes Buck, the big headache for Labor is to find out what went wrong between Friday evening and Saturday's closing of the votes.
Something changed dramatically during those 24 hrs, something that no one expected or even suspected.

All polls, for the last 18mths, have shown a lead for Labor incl the exit polls. Miracles might happen but usually not in Australian politics.

I'll take a bit of a guess by believing that Australians in general do not like change, especially not when it is garnished with a fear campaign
about franking credits. However, the franking credits issue has been in the public eye for several months, and should not have become a deciding point so close to the actual vote.

Similarly with Adani and Coal in general. More than 50% of Australians wanted some climate change actions long before voting day, and again
that could not have changed the results of all opinion polls on just the very day of voting.

For all the money in the World, Abbott, Dutton, Hunt, Christensen, Sarah Henderson and Michelle Lawdry were all gone before voting began, according to the opinion polls. From all these LNP'ers only Abbott got booted.

I haven't got enough hair to tear out more than I already have, but I am really concerned that some 'fishy business' is the answer for the 2019 Election result!

by Buck_naked
it has been stated in every election there is always a late swing back to the government.
Bill shorten made a late speech in blacktown saying "vote for change"
it should have been 'vote for a fair go', or 'vote for a fair suck of the sauce bottle'.
aussies don't like change, hence the saying "if it ain't broke, don't fix it"

by Slapsy
This looks to be right on the money :

D7OSqxXVUAAvXDA.jpg
There have even been reports that many of the UAP candidates may not comply with the sec.44 rules. If that is the case can those preferences be redistributed? Would make a big difference in Qld.

by Buck_naked
yep clive ran a good scare campaign.
the other big boost to the LNP was bob brown and his convoy coming up the coast of queensland.

Buck_naked wrote: ↑
23 May 2019, 17:13
yep clive ran a good scare campaign.
the other big boost to the LNP was bob brown and his convoy coming up the coast of queensland.

The stories we hear down here must be right Buck. Don't tell a Queenslander what to do,particularly if you are from south of the border.
You are right,though,Bob Brown is too old to be reliving his own history.


Buck, here is a very correct point of how those considering "franking credits" were misled by the LNP before the elections:

Franking credits:
There was an appropriate cap in the policy. Those who qualified for the aged pension were to receive the refund.

For anyone else, the refund was welfare to those who do not need it.

Remember too, that franking credits are not real money. They do not increase income or reduce tax liability for a taxpayer. So why for a non tax payer?


Yes, it is too late now but it is worthwhile to remember that a lie is a lie!

by Perrorist
The policy's objective was to avoid giving refunds to people who would otherwise not pay tax. A few people would have suffered as a result, and Labor should have protected them, but most of those who benefited undeservedly from the credit would have lost this perk. BTW, Australia is the only country where this concession is allowed, for which we can thank John Howard.

If Labor had had more nous, they would have grandfathered this benefit, and just denied it to new applicants.

by kfchugo
Just a personal observation, but I think that the power brokers in Labor critically underestimated Shortens lack of popularity with voters. Many (like myself) would have voted Labor but just could not stomach the thought of a "Prime Minister Shorten".

by Perrorist
Interesting. What do you think of Albanese?
All times are UTC+10:00
Page 3 of 4
Powered by phpBB® Forum Software © phpBB Limited
https://www.phpbb.com/